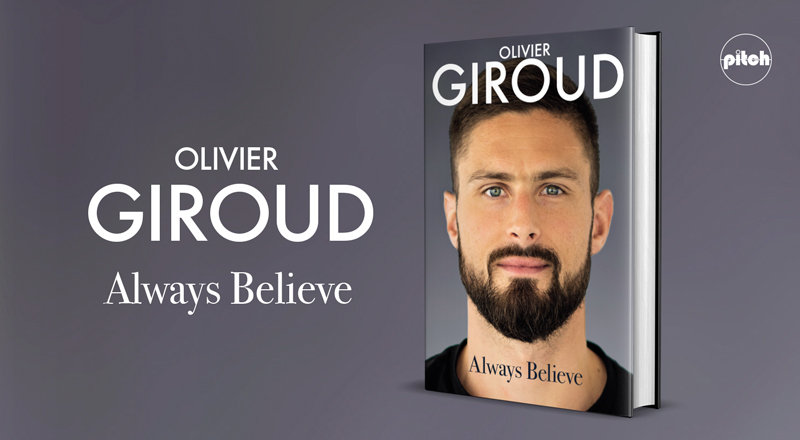 Pitch Publishing are pleased to announce the acquisition of the English rights to French World Cup winner Olivier Giroud’s autobiography Always Believe, which will be published this autumn.

The deal was brokered for Editions Plon by Mathilde Pineau-Valencienne, founder of London-based Tilly-Ink Rights Agency.

Giroud, often so private, has teamed up with French journalist Dominique Rouch to offer a unique insight into his life and career, and share with fans the highs and lows of a stellar career at the very highest level of the game.

Currently with Chelsea and formerly of Arsenal, Giroud has more than 100 caps for France, and helped them win the FIFA World Cup in Russia during 2018. He tells of his pride at being the second-most prolific scorer for the French team, behind Thierry Henry.

He also lays bare how he has learned to cope with a constant stream of criticism and questions around his selection for the national team; not least when he replaced Karim Benzema, when he also learned to deal with an incredible level of animosity.

Giroud fell in love with the game as soon as he could kick a ball; he started playing at the Froges Olympique Club at the age of four; and he’s made the sacrifices to fulfil his dream of becoming a professional footballer.

He’s an advocate of hard work, respect and humility, and his strength of character, his family and his unwavering faith helped him overcome adversity throughout his career. And at 34, the France striker is far from done with the game, and hungry for further success.

Pitch Publishing director Jane Camillin said, “We are thrilled to be publishing Olivier’s book here in the UK and allowing his many English fans this fascinating insight into his life and career, not just with Arsenal and Chelsea, but with the French national team.

“Olivier is a very private person, so this is a unique and revealing insight into his life, his career, his time with Chelsea, Arsenal, France and other teams, as well as the world of professional football here in the UK and in his home country of France.”