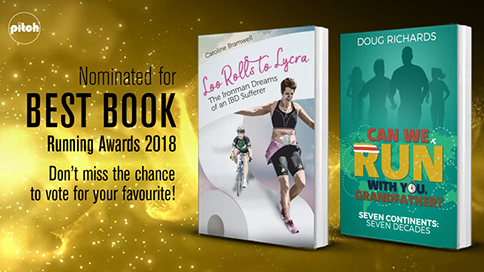 Two of our authors' inspirational running books have been nominated in this year's Running Awards.

Don't forget to vote for Doug Richards' Can We Run With You, Grandfather: Seven Continents, Seven Decades and Caroline Bramwell's Loo Rolls to Lycra: The Ironman Dreams of an IBD Sufferer.

Voting closes on 6th December so that the Running Awards can produce their 'Best Running Books for Christmas' list - and any help you can give in voting for your favourite in the Christmas/Books category would be much appreciated!

In his previous book Running Hot & Cold (a Running Awards Silver award winner in 2017) Doug described his journey from couch potato in late middle age to running long-distance races across deserts, mountains, jungles and snow fields on four of Earth's continents. Can We Run With You, Grandfather? describes Doug's ongoing journey towards his ultimate dream of running at least a half marathon on all seven continents before his 70th birthday.

Read Can We Run With You, Grandfather?, and discover:

Click here for more information, or to read a sample from Can We Run With You, Grandfather?

Loo Rolls to Lycra: The Ironman Dreams of an IBD Sufferer is the inspirational and insightful autobiography of Caroline Bramwell, a wife and mother who believed her life was going down the toilet when she was diagnosed with Ulcerative Colitis, an Inflammatory Bowel Disease. A self-confessed couch potato, Caroline turned to sport after intestinal surgery, dispelling the medical profession’s ‘you can’t do that’ attitude by announcing her London-to-Paris 24-hour cycle ride. Loo Rolls to Lycra is the epitome of the self-belief that anything is possible.

Read Loo Rolls to Lycra and you will discover:

Click here for more information, or to read a sample from Loo Rolls to Lycra