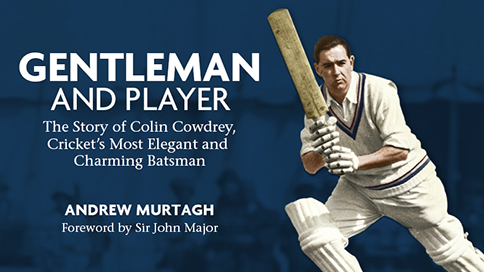 For the third time this week, we have received the wonderful news that another Pitch Publishing book and author have been nominated for a major prize. Well done to Andrew Murtagh, author of Gentleman and Player, which has been long-listed for the prestigious Cricket Society and MCC Book of the Year Award 2018.

Vic Marks, former England and Somerset cricketer and current Observer/ Guardian cricket writer and Test Match Special commentator, chairs a panel of judges which considers books nominated by Cricket Society and MCC members. For the 2018 competition (books about cricket published during 2017 are eligible), a short list will be announced next year and the overall winner announced at an event, in the Long Room at Lord's on Wednesday 18 April 2018.

Colin Cowdrey is remembered for the elegance of his strokeplay; but there was much more to this complex man than a classical cover drive. Gentleman and Player offers a unique insight into its subject, both on and off the cricket field.

Click here for more information, or to read a sample from Gentleman and Player.