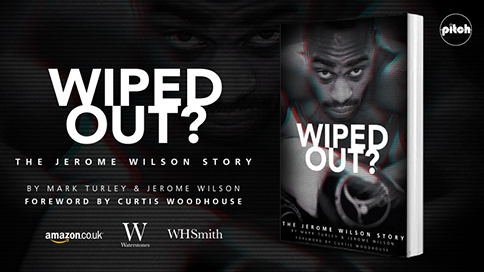 JEROME'S FIRST EVENT IS A SUCCESS

JEROME'S FIRST EVENT IS A SUCCESS

It was great to hear that Sheffield boxer Jerome Wilson's first public speaking event was a success.

Jerome's book, Wiped Out?, written with Mark Turley, centred around the terrible injuries he sustained in a fight back in 2014.

He talked about fighting back from his career-ending injury at the SHSC Annual Compassion Conference at Sheffield's St Mary’s Church & Conference Centre on Bramall Lane, where the audience gave him a warm response.

Click here for more information, or to read a sample from Wiped Out?

Wiped Out? tells the story of light welterweight prospect Jerome ‘Wipeout’ Wilson – and shines a light on boxing’s ultimate taboo. On 12 September 2014, in his 11th professional fight, Jerome was knocked out in the sixth round. He never got up.

Wilson was rushed to hospital and spent ten days comatose, near death. He had suffered a subdural haematoma, a large bleed on the brain, the most common fatal or near-fatal injury that afflicts fighters. When he finally came to, his sense of reality had unravelled. He was unable to speak or move. Eventually he was discharged and went home with a quarter of his skull missing.

As soon as he was able, Jerome recorded his innermost thoughts in a unique diary, which traces his gradual reconnection with the world. Published on the first anniversary of his injury, Wiped Out is the most personal reaction to massive brain trauma ever put on paper. Jerome’s future is uncertain, but he knows he is lucky to be alive.

Wiped Out? is far more than just another boxing autobiography. It is a near-universal story of life and death, transcending sport.