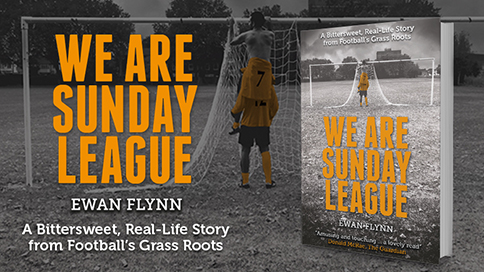 The real-life story of Wizards FC, a team of former school friends who – with a few star ringers – slogged their way through mud, rain, skinheads and Staffordshire bull terriers (and their business) to the summit of Sunday League football in north London.

It’s about growing up, friendship, being a man (sometimes), injuries and passion. Ewan Flynn brings alive the bobbly pitches, the scars of professional careers cut short, the thrill of lifting Sunday League silverware, even the dream-come-true of captaining your country against the World Champions in a UEFA European Championship qualifier.

No schoolboy was ever captivated by net spends and transfer windows. We Are Sunday League reminds us why we fell in love with the game, and why once football has you, it never lets you go.

We Are Sunday League comes from the untold side of football. It’s a heartfelt, real-life account of the grassroots amateur game by the captain of the Wizards FC:

Click here for more information, or to read a sample from We Are Sunday League.