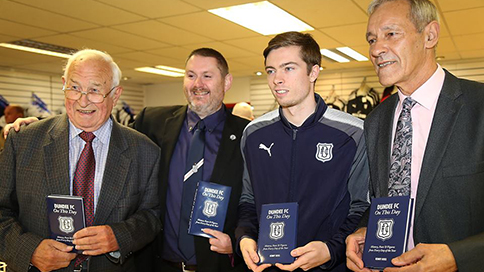 The official launch of Dundee FC On This Day took place on Saturday at the the club shop Dundee Direct at Dens Park.

The signing event was a great hit with fans, attended by Scottish title winner and DFC Hall of Fame inductee Bobby Wishart (who wrote the foreword to the book), Ally Donaldson who is Dundee's clean sheet record holder and also in the Hall of Fame, and Dundee forward Craig Wighton.

Club President Pat Liney, legendary keeper from Dundee's title-winning side also popped in to catch up with some old team-mates, and signed some books.

Thanks go out to everyone at the club for helpiing to make the event such a great success.

Dundee FC On This Day is a journey, in diary form, through the history of the famous Dark Blues. Dundee FC has enjoyed a long, rich history and the book records the five major trophy wins, the runs to two European semi-finals, the Dee-Fiant season, the promotions, significant events, sensational signings and memorable derby wins over Dundee United.

Among the highlights of Dundee FC On This Day:

Click here for more information on Dundee FC on This Day.