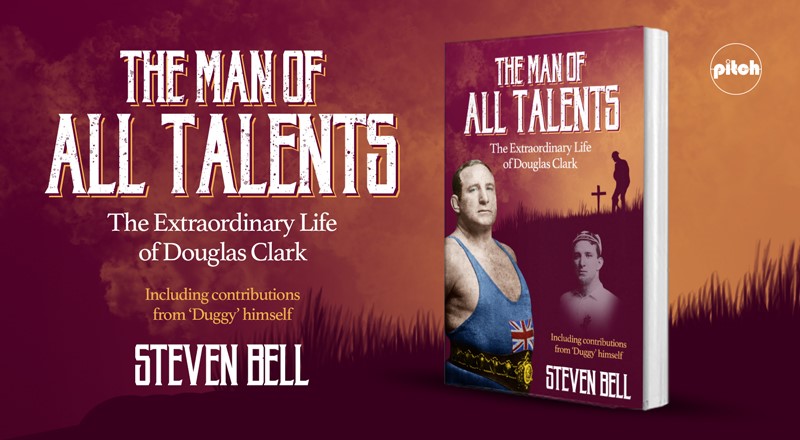 TRAILER: MAN OF ALL TALENTS

TRAILER: MAN OF ALL TALENTS

Check out this amazing trailer for Martin Bell's short film based on the book by his brother Steven Bell The Man of All Talents.

This is Steven's second book following the success of From Triumph to Tragedy: The Chapecoense Story. With his first book set in Brazil, this time Steven sought a subject closer to home.

Steven lives in Huddersfield, the town where Douglas Clark spent most of his life. He was therefore perfectly placed to know and understand Duggy’s legend.

The Man of All Talents is the remarkable story of rugby and wrestling legend Douglas 'Duggy' Clark. Born in 1891 in the sleepy Cumbrian village of Maryport, at 14 he left school to work for his father's coal merchant business.

Duggy grew into an exceptionally strong but quiet and reserved young man. His two great passions were rugby and Cumberland and Westmorland-style wrestling, and he excelled at both.

By 24 he was already a rugby league great and a key member of Huddersfield's 'Team of All Talents', winning every honour the sport could offer.

He represented Britain in the infamous 1914 'Rorke's Drift' tour of Australia before being called up to serve in the Great War.

He was awarded the Military Medal for bravery, but his war injuries were so severe he was discharged with a 20% disability certificate.

Doctors gave Duggy an ultimatum: either he could stay home and live a long but sedate and ordinary life or risk his health by returning to sport. He chose the latter and went on to achieve more extraordinary and pioneering feats.

From Triumph to Tragedy is the glorious, uplifting but ultimately tragic story of Chapecoense, the small-town Brazilian football club that made worldwide news following their meteoric rise from non-league to continental sensation.

Yet the headlines that will be remembered centre on the air disaster en route to what should have been their greatest ever match.

Less than ten years after the local mayor had intervened to save the club from liquidation, Associação Chapecoense de Futebol had become champions of the Santa Catarina State Championship.

At the summit of the Brazilian national league structure, they also qualified sensationally for the final of the Copa Sul Americana. The team of rejects and journeymen became heroes not just in their own city, but also to the whole nation.

But the final was never to take place, as tragedy struck to render all those triumphant nights insignificant. Could the club now stage one more incredible recovery to allow Era Chape to continue, rather than to accept their fate as the tragic team beloved in fans' memories?

Clearly a very talented pair of siblings, with a great eye for story telling on the page and screen.