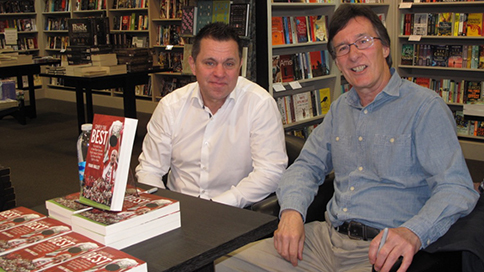 Saturday saw the hugely successful launch of Frank Malley's Simply the Best at Waterstones in Wigan.

"It went really well," said Frank after the event. "There were so many people that the manager actually said, 'We've not seen anything like this in this shop since Harry Potter!'. He could have been being kind but it's a quote I will happily hang on to!"

Thanks go out to Martin and everyone else who came along - especially the welcoming and helpful staff at Waterstones who helped Frank to sell out the shop's entire stock of the book.

A special mention must go to the official Wigan supporters group, The Riversiders, who kindly tweeted pics of the signing live on the day to encourage people to pop in and buy a copy.

Click here for more information, or to read a sample from Simply the Best.

The legends of Wigan rugby league’s golden era have been brought together to tell the story of the greatest cup run in the sport’s history.