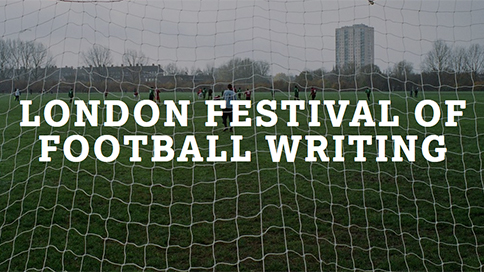 Carrie Dunn and Steve Tongue are among the many famous names appearing this week at the London Festival of Football Writing, events being held at Waterstones bookshop on Tottenham Court Road.

Carrie Dunn, author of The Roar of the Lionesses: Women's Football in England, is on the bill at the prestigious opening event, which starts at 6.30 tonight, Tuesday 16 May. She will be discussing the current state of English women's football with sportswriter Anna Kessel and presenter Jacqui Oatley MBE.

As it says on the Festival website, “The panel will be discussing what the future holds for women's football, from the big bucks and big names of the Women’s Super League, to the state of grassroots clubs in elite divisions. They’ll assess England’s chances in the upcoming UEFA Women’s Euro 2017, and should the team exceed expectations, what level of respect, recognition and reward they can expect.”

“Steve Tongue's Turf Wars: A History of London Football inspired this special panel event on football in London. Steve will be joined on the panel by Phillipe Auclair, Jacob Steinberg and chair, Mina Rzouki. They will discuss the city's rich and vibrant footballing history, from the standout non-league sides that rose to the professional ranks, to the biggest names with their enduring presence in the Premier League. As this year's season comes to a close, the panel will ask, what next for the capital's clubs after thus tumultuous and exciting season?”