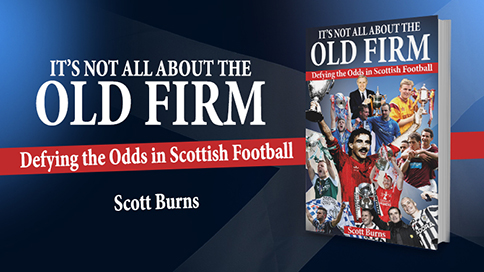 DEFYING THE ODDS IN SCOTTISH FOOTBALL

DEFYING THE ODDS IN SCOTTISH FOOTBALL

It's Not All About The Old Firm tells the inside stories of some of the Scottish game's greatest achievements – how heroes and legends have overcome the odds, plus Celtic and Rangers. It covers every league title, European, Scottish Cup and League Cup victory from Sir Alex Ferguson's time at Aberdeen to Hibs finally bursting their hoodoo.

From the goals and glory to the behind-the-scenes stories, including haunted hotels, dressing-room bust-ups, betting scandals and the personal heartbreak behind some of Scottish football’s greatest footballing achievements.

It's Not All About The Old Firm is packed with offbeat stories, larger-than-life characters and insights from behind the scenes. Read the book and discover:

Quirky, funny and inspirational – this really is a collection of stories that shows Scottish football at its very best. Click here for more information.